Blood in the Snow 2019 Shorts 2:DEATH'S TOLL, ASKING FOR A FRIEND, DON'T SNEEZE, DOCKING, WHAT'S WITHIN, EXT, EXPERIENCE MACHINE and THE ACRYLIC

DEATHS TOLL
Great looking villain in a horror short that is much too short to really work. It concerns a demon like monster hunting a young man.

ASKING FOR A FRIEND
Humor mixes with horror as a young woman discovers her friend has killed someone and realizes not they have to get rid of the body- but it's all going wrong... Amusing horror comedy that has some laughs and some chills as the two women try to just get rid of the incriminating evidence.

DON'T SNEEZE
Funny short film about the dangers of sneezing. I won't say more lest I ruin it.

DOCKING
Adult oriented horror tale that is kind of a too long shaggy dog story. This is probably the biggest head scratcher of the the festival, and the only film I'm really not certain belongs at this fest. Yes I am up or down on other films but I know why everyone was programmed, this one I'm not sure. This belongs at a different fest. 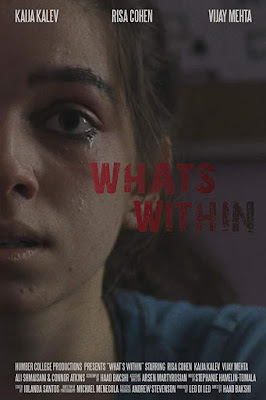 WHAT'S WITHIN
Parents come home to find that their daughter has made a mess in the house. They are unaware that there things are not as they think they are...real world scary film about something all of us hope we never face. 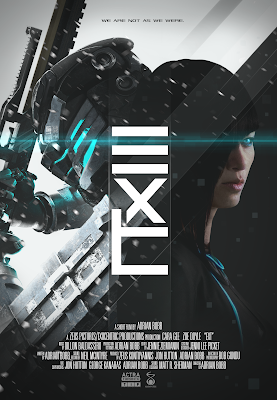 EXT
As human's return to the real world from a digital one a war breaks out. An intriguing premise, sort of like what would happen if everyone woke up in the matrix, is much too short to full explore all of the ideas kicked around. One of the few times I'm not sure if the film should be a feature or not...but it definitely need more than 9 minutes. As it is it's an intriguing 9 minutes. 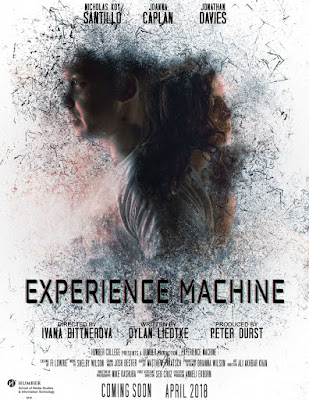 EXPERIENCE MACHINE
How do I write this up without wrecking the twists and turns? A couple seemingly having a perfect life begin to have a break down as the way the see the world and the way it really is don't mesh. Its a really good film that kicks you in the ass with how it plays out. 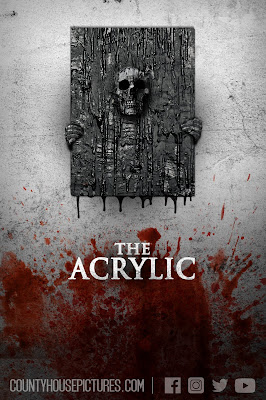 THE ACRYLIC
A woman buys a haunted painting and weird things happen. Yes, we've been here before but at the same time this is a well made little chiller that hits all the right notes.

For more information or tickets to any of these shorts at Blood in The Snow go here
Posted by Steve Kopian at November 22, 2019