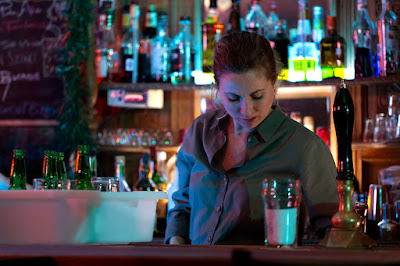 When a young woman gets a frantic message from her brother she rushes to his apartment to find him alive and well and the place filled with dead copies of himself.

Strange trippy film that, while very good, would probably  have been better as a short or TV show. This is exactly the sort of thing that would be perfect on Creepshow or Tales From the Darkside  or any of the hour long anthology shows. As good as the central idea is, the way it spins out here goes on a bit too long (even at about 75 minutes) and it could have used a bit of trimming or a sped up pace.

This is not to say the film is bad, it's not. It nicely acted, funny in the right places, its wonderfully philosophical and compelling to the end. It simply needs to move faster.

Quibble aside this is recommended when it plays Blood in the Snow.

For tickets and more information go here
Posted by Steve Kopian at November 22, 2019

Email ThisBlogThis!Share to TwitterShare to FacebookShare to Pinterest
Labels: horror, The Blood in the Snow Canadian Film Festival 2019