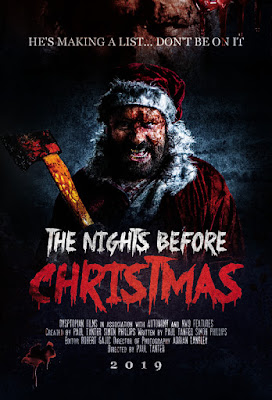 The FBI is on the trail of a serial killer and are shocked to learn that a couple of mental paients who now think they are Santa and Mrs Claus are behind the killings...

If you ever wanted to know what the Joker and Harley Quinn would be like as reimagined as Santa and Mrs Claus this film is for you.  The wicked leads, played to near perfection by Simon Phillips and Sayla de Goede are demonic Clauses by way of the big bad of the DC comic universe. Frankly they are much more engaging than Joaquin Phoenix in the current major studio release and their mania is much more understandable.

That the film is as enjoyable as it is due entirely to the fact that the leads are engaging. Actually I should back that up and include the whole cast who sell the story of killer Clauses in a story that in the wrong hands could have been just okay. It is the cast that makes you not care that we are in familiar territory (no seriously how many killer Santa films are there?) and want to stay to the end. Best of all it has you thinking that as lame as most sequels are maybe this time that might be a good idea.

This is a small little treasure of a holiday horror film.

See it at Blood in the Snow. For more information and tickets go here

Email ThisBlogThis!Share to TwitterShare to FacebookShare to Pinterest
Labels: christmas, horror, The Blood in the Snow Canadian Film Festival 2019