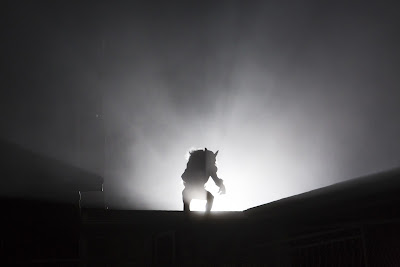 At the launch of a werewolf inspired video game someone begins to be killing all of the guests...and it appears that the killer is a werewolf.

Old school murder mystery ala Agatha Christie or some of the great program thrillers of the 1930's and 40's but with monsters, HUNTER'S MOON entertains. Part of the reason is we haven't really seen this structure used much in the last couple of decades. We don't really get films where the hero, and the audience, has to deduce who the killer is at the same time. Nowadays filmmakers can't wait to reveal who the bad guy and what is going on. That isn't the case here and we are close to the end before we get a reveal.

I like that the cast works to sell the mayhem on screen. More often than not in inde horror films the cast performs with nods and winks and completely wrecks the tension and mood. That isn't the case here and as a result we are dragged all the way to the end . The cast also makes us like all the characters to the point we groan when someone dies.

If there is any complaint on my part it is that the pacing is slightly off. It isn't fatal but while the film takes it's time setting everything up, it kind of races to the conclusion. It's almost as if the filmmakers suddenly realized that they had to move things along a little quicker and it did so a little too fast. Again it isn't anything that hurts the film other than I would have liked a bit more time with the characters before they are taken from us.

This is an enjoyable little film and worth your time.

For tickets and more information on the Blood in the Snow screening go here
Posted by Steve Kopian at November 23, 2019

Email ThisBlogThis!Share to TwitterShare to FacebookShare to Pinterest
Labels: horror, mystery, The Blood in the Snow Canadian Film Festival 2019