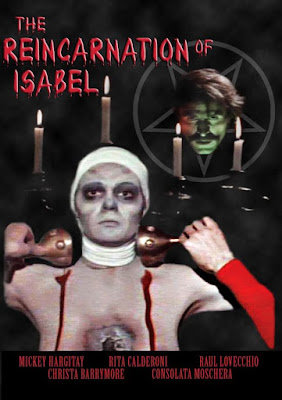 Odd softcore mix of horror, sex and psychedelia as a people taking possession of an ancient mansion – unaware that there is a group of ancient vampire living in the catacombs underneath looking to resurrect their queen.

More interested in trippy and sexy images than narrative thrust the film presents a steady parade of eye popping images that while initially delightful become less intriguing as the film goes. It’s not because they are bad but because every time they begin to come together in a hypnotic journey the film stops for some sort of narrative scene. At the same time the narrative never comes together because the film is constantly stopping to show either the trippy images or naked women. I’m sure back in the 1970’s this softcore approach was eatn up by anyone who didn’t want to go to a porno palace but 40 years on it’s tiring.

In the film’s defense the images are often striking unfortunately the film just never gels enough to amount to anything.
Posted by Steve Kopian at November 25, 2019