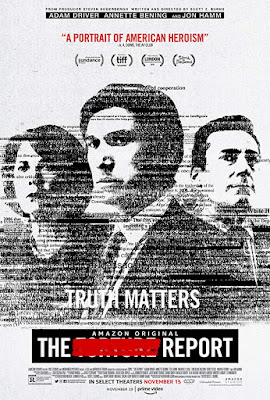 Portrait of Daniel J Jones (Adam Driver) and his uncovering of the failure of CIA enhanced interrogation techniques (aka torture) to get information from detainees.

Bleak black and vaguely hopeful film about the evil the United State intelligence agencies did in the wake of 9/11 and how one man's dogged determination revealed it to the world. This is a kind of modern day All The President's Men tale as Jones is dropped into the lion's den and forced to cope with changes to the playing field as politics removes most of his staff, results in hacking of his computers and forces him to do end runs to make sure the report doesn't get buried. It a wonderful tale that gives hope in that we realize that some people don't give a damn.

At the same time the film doesn't shy away at showing Washington for what it is, which is a place where everyone moves toward what is politically expedient. Everyone is worrying about pleasing the powers that be either a boss or general public. And we also see that everyone is concerned with covering up their own ass as we see that some decisions regarding torture were never run past President Bush or other high level people because they might get cold feet. Most damning of all is the discussion that the CIA knew before 1979 that torture doesn't work, but went ahead with anyway because they were desperate and some new minds convinced them otherwise.

This is a deeply disturbing movie. Even knowing the story watching it play out before our eyes is a chilling affair. While the film can seem a tad dry at the start, it is firmly focused on the report and nothing else, the weight of events and the performances of the cast particularly Driver and Annnette Bening as Dianne Feinstein drag us along with their urgency.

Highly recommended. THE REPORT is now available on Amazon Prime 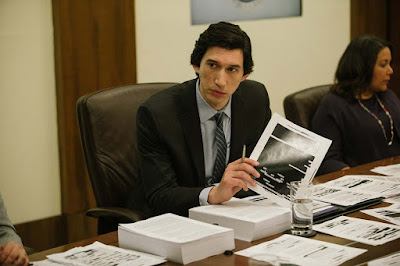