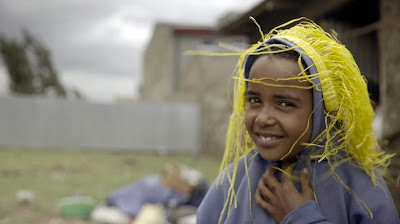 I am trying to suss out how much of Mo Scarpelli's ANBESSA is pure documentary and how much is actual recording. The reason I am saying this is not because it is bad but rather it travels really damn close to many art house slice of life films that you could release it as a narrative and have it hailed as a masterpiece of naturalistic acting.

The film follows a young Ethiopian boy named Aslif who lives with his mother. They were displaced by developers building condos and the film follows the boy as he tries to survive in the world.

Gorgeously shot and compelling filmed this is a film where we get inside of the people on screen simply by following the way they look and move. Yea, they talk and interact but the words that pass between the say infinitely more than the words do. We fall into their lives and are carried along.

Watching this film is a stunning experience because the film makes us a feel the lives of the people on screen in ways that few films do. A towering achievement whether it is fact or fiction.