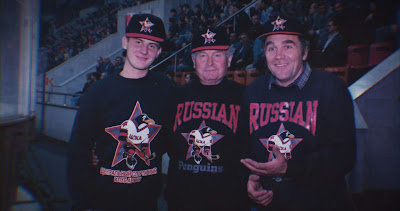 I honestly don't know what I think of RED PENGUINS. While it is what was advertised as, a look at the partnership between the Red Army hockey team and the Pittsburgh Penguins right after the fall of the Soviet Union, there is a point where it, like the deal between the two hockey entities goes off the rails.

The quick version of the story is that the owners of the Pittsburgh Penguins sense an opportunity to get the best Russian players after the fall of communism so they sign a deal with the Red Army team which is in desperate need of money. They send a guy who they are sure can turn things around and he does...but just as it becomes clear there is money to be made and Disney is interested things go weird as shadow partners appear, money disappears  and the danger level goes off the charts.

Its a hell of a story and I was hooked for the long haul early on. The twists and turns really are nuts  and for about half of the films running time this film is the sort of thing you can't take your eyes off of because if it wasn't true you wouldn't believe it.

The problem is as things begin to turn and the danger level begins to rise the film loses focus. Part of the problem is that as unnamed bad guys enter the film the details go by the way side and the time line is less certain. While I can understand not naming the name of Russian mafia guys who may hunt you down, the attached lack of details is bothersome. We seem to jump through time as if we are being told this in a bar not in a movie, other recountings of events are cursory and not as detailed earlier on and we lose any number of people who had been a focus earlier on.

Not long past the midway point I felt hopelessly lost.

Frankly this is a great tale about what it was like to do work with the former Soviet Union. Unfortunately it need more details to really work.
Posted by Steve Kopian at November 12, 2019