A brief piece on Screwdriver (2018) Other Israel Film festival 2019 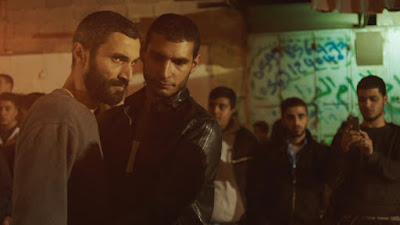 After Zaid's friend is killed by an Israeli sniper, he and his friends go out looking for revenge. When one of the friends kills a man he thinks is Israeli, the friends flee but Zaid is caught and thrown into prison. Getting out fifteen years later Zaid struggles to come to terms with the sudden change, with friends who have moved on and family who don't seem to understand why he is so with drawn.

I am mixed concerning SCREWDRIVER. While it is in no way  a bad film it never fully connected to me on an emotional level. To be certain this film is an excellent and heady discussion of what being in solitary for the better part of a decade and a half will do to you, however the fact that the time in prison made Zaid withdrawn and disconnected made him hard to connect to emotionally. Intellectually I completely understand why it was done, but at the same time it kept me distant to the point I like the film rather than love it.

Regardless it is worth a look when it plays November 21 at the Other Israel Film Festival.
Posted by Steve Kopian at November 19, 2019