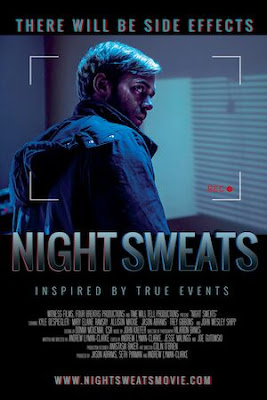 Night Sweats is a tough film to review. While the film is the story of a skateboarder who begins investigating what is happening with a self-help organization following some deaths of people connected to it is the synopsis that will get you in the reality is that where it goes is something else entirely. The fact that the film goes into unexpected territory is what will keep you watching…

This is a small little joy. A solid well made thriller that simply is entertaining it isn’t trying to hit it out of the park so much as getting a few extra bases. Beautifully designed so as to give us a bunch of characters we really like, the film has created a tale that is twisting and turning enough that we genuinely want to know how it all comes out.

If you want to know how good it is consider that while I watching the film at lunch on my computer I ended up joined by a co-worker who came by not long after I started, got hooked, and then brought their lunch to sit and watch with me…. And they got really pissed off when we had to stop the film because out hour to eat was over. Then then made me promise to finish up the film before went home. When the film was finished I asked them what they thought they said “You know I liked it, I mean I stayed past quitting time to see how it ended.” That may not be a Siskel and Ebert two thumps up or five star review, but it does prove you will be entertained.

Night Sweats starts on November 14th in New York and VOD and is recommended
Posted by Steve Kopian at November 12, 2019