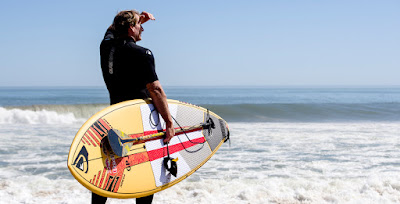 This is a portrait of champion windsurfer/kiter surfer/ stand up paddle boarder and just plain surfer Robby Naish as he tries to find and ride the longest wave.

I must confess my desire to do an incredibly short review had me toying with the simple statement "It's just okay" but I thought that would be rude.

Rude or not the film really is just okay. While not bad, and certain to gain stature on the big screen where the wide vistas will have the audience sighing in awe, it is in fact exactly like any other of the recent docs to have come out over the last ten years- all of which follow the rise of the surfer from when they were a kid up to the present. All have some catch or another to be sure, but all are structured exactly alike which is fine but grows tiresome around the twenty minute mark of all the films.

Honestly I would have expected more from director Joe Berlinger who has made some of the most arresting docs of the past couple of decades.

Worth a look on the big screen, but if you aren't seeing it that way its best for surf fans only.
Posted by Steve Kopian at November 17, 2019