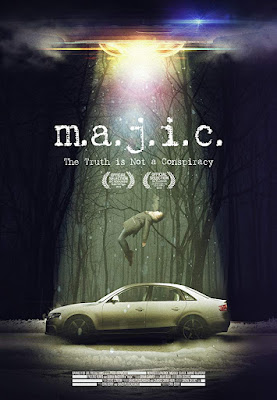 The MAJIC of the title refers to the alleged MJ-12 documents which say that the US government was in contact with aliens following a UFO crash in Roswell New Mexico.

The film is the story of an anti-conspiatorial podcaster who ends up dropped down the rabbit hole when she meets a supposed member of MJ-12 and begins to see things that are or aren't there. Worse she begins to doubt what she knows because history seems to be changing around her.

I am really torn about MAJIC. I mean really torn. On the one had it is a killer story with some wicked twists and turns. I think that for the most part this is a super science fiction conspiracy tale that is fun to settle into and watch with a bucket of popcorn...

...and I think it is completely derailed by Paula Brancati in the lead role. Fast talking, at all times, and seemingly above it all, at all times, see seems to have been dropped in from another movie (which considering where this movie goes is a possibility). It's not that Brancati is bad, rather she is just completely wrong for the part. Knowing a couple of podcasters, and even regular human beings, I know people can be unconnected to reality, and I was willing to let it go but there is a point where reality came crashing in where her performance should have changed, she should have modulated things, she should have been in the shit instead of still thinking she was above it...especially since the dialog says she should have been.

On the other hand Brancati may work for you and you'll love the film.

Worth a shot when it plays at Blood in the Snow. For more information and tickets go here. 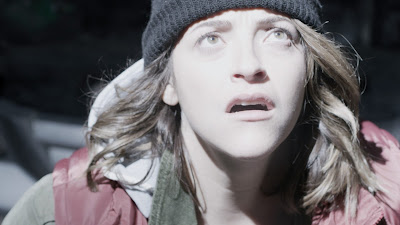 Email ThisBlogThis!Share to TwitterShare to FacebookShare to Pinterest
Labels: horror, science fiction, The Blood in the Snow Canadian Film Festival 2019