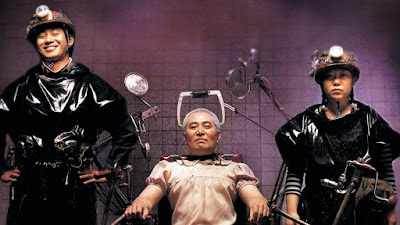 Staring Friday Film at Lincoln Center is going Korean film crazy and running a huge slate of classic Korean films from the last 3 decades that helped change the world’s opinion of Korean films. They are running early works by directors Bong Joon Ho,Hong Sang Soo, Ryoo Seung-wan,Kim Jee-woon, Park Chan-wook, E J-yong and other who are now the names everyone think of producing some of the best films in the world in a series called RELENTLESS INVENTION: NEW KOREAN CINEMA, 1996–2003 .

The selections are incredible- then again how could they not be, they were made by the guys at Subway Cinema who are among the best experts on Asian films anywhere in the world. I don’t think there is a bad film among their choices…. and I should know having seen pretty much everyone of them- so when I say go buy tickets and see as many as you can. Even if you have seen the films so see them again since this is a rare chance to see them on a big screen , which is what (most of the Unseen Film crew is planning on doing.)

Now a confession - I was planning on posting links to all the films we've reviewed over the years- the problem is that the Unseen Films search engine is not working the way it should. Because we reviewed the films all through the last decade and because I've posted all sorts pieces on fests and series where the films have played I'm having trouble pulling them up. However since I want you know what is good I'm giving you a list of the films (I'm pretty sure) we've reviewed. All are recommended. (I will post the links as I find them)

For tickets and more information go here.
Posted by Steve Kopian at November 18, 2019