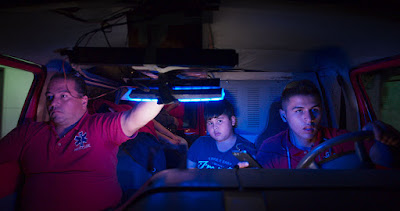 If there was ever a film that could potentially radicalize the world in favor of socialized medicine, it might be Luke Lorentzen's astonishing documentary Midnight Family. The film takes place in Mexico City where there are only forty-five public ambulances for nine million people. This shortage led to an explosion of for-profit private ambulance services swarming the streets with their radios tuned to police channels to get tips for potential "clients." It seems like a laissez-faire capitalist's dream come true—surely the free market will make sure consumers get the best care at the cheapest, most competitive prices, right? But as Lorentzen discovers, the reality is so grim and disturbing it makes one almost pine for pre-Obamacare American healthcare.

The film follows the Ochoa family who operates one of these ambulance services as they wage a nightly struggle against bankruptcy, literally racing other private ambulances to accident scenes like NASCAR drivers on crowded streets. But since they frequently lose, their revenue is inconsistent at best, forcing them to skip meals to afford food and medical supplies. (One of the most pathetic scenes sees the father forced to feed his sons "tacos" of canned tuna and corn on saltine crackers.)

The final insult? Many of their customers can't or won't pay. After all, when they pick up a crashed motorcyclist or a young girl who fell from a roof, how are they to know if they're rich or poor? On the off chance that they do have money, what are the odds that they would have the $1500 peso for the ride physically on them when they get to the hospital? And finally, since they're not officially affiliated with the public hospitals, there's literally nothing compelling their customers to pay, particularly if they're unhappy with their care. It's a desperate, horrifying situation, even before things like police extortion and overcrowded hospitals are considered. As one of the Ochoa sons explains, the city would fall apart without private ambulances. But how could someone argue that it already hasn't?

In addition to being a powerful anti-capitalist polemic, Midnight Family is one of the best-looking documentaries to come out in 2019: scenes inside the ambulance are dyed an eery midnight blue and the nighttime streets are dotted with multicolored streetlights and storefronts like a Michael Mann film. It's the perfect neon-noir setting for a neo-noir hellscape.