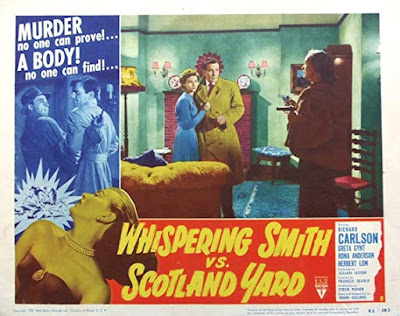 Richard Carlson plays Steve Smith, a well known detective who goes to London for a vacation. He is harassed by a lovely lady to look into what appears to be an open and shut case of suicide, however he refuses to look into the matter until some one makes an effort to run the girl down in his presence. Smith then finds himself dropped down the rabbit hole as he tries to find out what is really going on.

Odd mix of romance and mystery has a great cast that includes Herbert Lom and other British stalwarts. The problem is that as good as they are and as menacing as they seem the plot implodes about 40 minutes in as it paints itself into a corner and then tries to get out. The writers unfortunately made some really odd choices that seem to be there only to keep the plot moving, for example we never know what one character looks like until the final dash to the end. Surely someone, anyone would have had a photo-say the police? It makes no sense.

Also not making a great deal of sense is the person behind it all who is revealed to be as insane as they come complete with a lip smacking eye rolling performance. We were suppose to buy this? I painfully limped to the ending vowing never to watch this film again.

I suggest you avoid this.
Posted by Steve Kopian at November 27, 2019