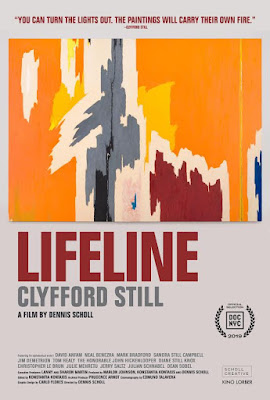 This is a great portrait of artist Clyfford Still who, along with Jackson Pollack and Mark Rothko defined abstract expressionism.

I can hear the crickets…

Don’t feel bad if you don’t know Still, he was more interested in painting than self-promotion. Where other artists stepped forward into the light he stepped back. While by all accounts a great friends and a loving family man he could be a surly cuss when it came to his art. He hated critics (a hysterical part of the film has an art critic reading Land’s thought on critics) and warred with New York’s Museum of Modern Art who only wanted his minor works and seemed to shut him out making it difficult for people to discover him.

Frankly until this film I didn’t know much about him, knowing him from his connections to Pollack and Rothko as well as need to have some background on him so I could understand what a friend well versed in art was talking about. And to be honest until I saw this film I didn’t retain anything other than his name and vague familiarity with his work. After seeing the film I hit the internet and was searching out images of his paintings. (I am so jonesing to hit the art museums and see his work up close and personal)

This is a great film. Not only does it restore Still to a name that more than art aficionados know, it also explains his place with in the art community. We see how he interacted with Rothko and Pollack and saw how he influenced other artists as well. Because this film does more than just tell us about one artist but connects him up to those around him, the larger art community and the world we get a better understanding not only of the work and the man but of society in general. Still changed how we see the world and Lifeline explains that.

There are little joys sprinkled through out the film. Listening to Still’s daughters talk about his life is a joy. Also a joy is the moment when one of the curators of Land’s museum find out on camera that there are 34 hours of audio recordings of the artist talking about his work. A shot of someone at the Still Museum pulling out racks of his work overwhelms with the sense of just how much he created.

While I can’t be certain how those who are not art fans will react, I think those who love art will be delighted.

One of my favorite films of DOC NYC
Posted by Steve Kopian at November 12, 2019