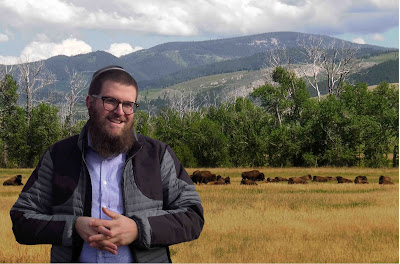 Rabbi Chaim Bruk goes from door to door, offering to put up mezuzahs for the Jews living in the community of Bozeman, Montana. “I’m God’s salesman,” the Chabad rabbi proudly states. Rabbi Chaim, as the members of his community and the surrounding Montana areas refer to him, moved to Bozeman with the mission of opening up a Chabad center offering prayer services, holiday events, and scotch and sushi, when the occarion calls for it. He also aimed to put up 2,000 mezuzahs on Jewish doorposts.

The old joke goes something like, “If a Jew washed up on a deserted island, he’d build three shuls (synagogues): the one he attends, the one he doesn’t, and the one he’d never go to.” Jewish history is rife with disagreements, conflicting traditions, and schisms, as the matter of interepreting Jewish laws and scripture came into conflict with the modern problems and personal discomforts, among other reasons. Without unpacking all the branches and sects and differing viewpoints, suffice it to say that Rabbi Chaim was not the first rabbi to Montana, and his efforts are not beloved by all.

The Rabbi Goes West, as described in the project’s Kickstarter, is “a documentary about religious diversity,” giving voices to Conservative, Reform, and retired rabbis of Montana who take issue with Rabbi Chaim’s style. Co-directors Gerald Peary and Amy Geller give each rabbi their platform to speak about their concerns, arguments, and rebuttals. As is often found in Talmudic discourse, there’s no conclusion definitively determined.

Peary and Geller certainly found engaging personalities, a collection of varyingly entertaining rabbis who all have strong opinions they don’t mind being blunt about. Rabbi Chaim won’t attend Jewish coalition events that don’t keep to Jewish traditions — “99% Kosher is 100% not Kosher” — while Conservative Rabbi Ed Stafman doesn’t want his congregants having their mezuzahs put up by Rabbi Chaim.

Tensions flare and every side sets clear cases in the arguments of Judaism’s definition and each rabbi’s role, but while the documentary seems to ratchet up drama, there’s never really a breaking point. While there is a significant episode involving a series of anti-Semitic cyberterrorism and the communal responses that came after, The Rabbi Goes West is a story told in the past tense, offering reflections and post-scripts when its very nature begs the question of what’s going to happen next. For better or worse, the documentary leaves its viewers hoping for more.
Posted by Steve Kopian at November 18, 2019