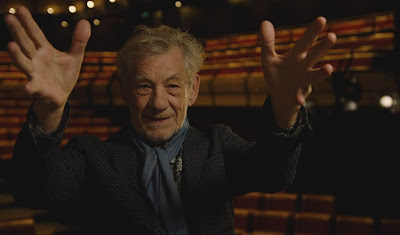 There is no question that ON BROADWAY is a great film. It is a beautifully told history of Broadway theater over the last 50 years. It is both direct and to the point and it contains some absolutely wonderful stories that make it feel like you are sitting in the room with all of the greats who are interviewed.

After a brief description of the classic days of Broadway when it was the source of much of popular music and created the dreams of stardom for the next wave of stars, the film shifts gears and talks about the decline of Broadway in the late 60's and early 70's when attendance was near zero. It then follows the rise out of darkness as Off Broadway began to send massive hit to the stages, how the London theater began to invade and theaters came back to life. The whole tale is hung around following the play THE NAP come to life on stage at the Manhattan Theater Club.

How in love with the greatness you are going to be determined by how much affinity you have for the history of the Great White Way. I have a great affinity for it and have spent all the money that should be in my retirement savings seeing shows over the last two plus decades so I loved it. I was enthralled by both the history and the the stories of the stars (Helen Mirren feeling kinship for the con men and sex workers of the bad old days is delightful) which opened up and made real the mythic place called Broadway.

And to me Broadway was mythic. My family couldn't really afford to just go to Broadway, so it was left to school trips (My first show was Pippin and we arrived late, hustling in as the cast sang Magic To Do, thus dooming me for all time as I entered a dream I never wanted to leave) or broken piggie banks to impress a potential girlfriend to get me to the theater. Only when I had a good job that gave me extra regular cash did I begin to go frequently. And the more I went the more hooked I became.

ON BROADWAY is a glorious peak behind the curtain. It reveals to us what it i like to be on the other side of the orchestra pit. While it is not all encompassing, the film runs under 90 minutes so its limited (for example there are no long excerpts from shows), it does give us enough to get us started. We can begin to haunt the library and You Tube and elsewhere for more and more information. Hell, when the film was done I stated pulling books off my shelf and looking through old Playbills.

This is a great film.  It is an absolute must for anyone who loves the theater and want to know how the current iteration of Broadway came to be.

ON BROADWAY plays Twice on November 11th and once on the 12th. For tickets and more information go here.
Posted by Steve Kopian at November 09, 2019