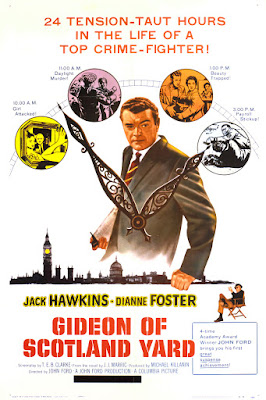 Seemingly odd choice John Ford film about a Scotland Yard detective over the course of a day. It's odd familial comedy bookending a day in the life.

Feeling very much like a John Ford film, it's a not particularly memorable film that feels more a construction than anything else, with all of the events set up so that something would happen for Gideon to do-and as for the finale- how could you not see that coming.

I can't really recommend it. It's not bad but I felt like I had kind of wasted the time it took to see it, partly because the film insists on tying everything up.

John Ford should have done better- if nothing else he should have been more interesting instead of just workmanlike and bland.

For John Ford completists or those who stumble upon it only.
Posted by Steve Kopian at November 29, 2019