Cause of Death (2018) Other Israel Film Festival 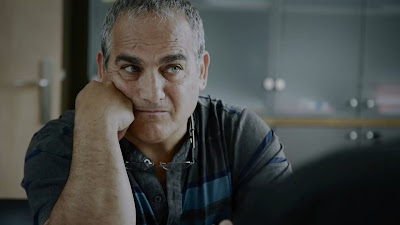 Ten years after Jamal Barakat's police officer brother Salim was killed stopping a terrorist attack he discovers that there maybe more to the story than he was told and that his death may have been at the hands of someone other than the terrorist. The crushing trip down the rabbit hole that upsets Barakat's whole life comes from a comment from someone who was at the scene who tells him that it was tragic that his brother was shot, Jamal had been told his brother's throat had been cut. This puzzling comment then sets Jamal on the road to find the truth as little comments said to him over the years mix with things to uncover to make him realize that the official story  that his brother died at the hands of the terrorist he stopped from killing dozens of people may not be the entire truth.

Charting both Jamal's quest for answers as well as how his quest changes his relationship with those around him, particularly the police officers who were his brother's friends, CAUSE OF DEATH is heavy film. It is a stunning piece of filmmaking that shows us how one fundamental change in what we think is the truth can send us spinning. While there is no question about Salim's heroism, the fact that his death may have been a mistake is devastating over a decade later. It is a masterful piece of filmmaking that while working on the smaller level of this one incident sets our minds going about what if this happened to us, how would we react?

I was knocked back on my heals. Going into the film I had been told that it was possibly the best film at the Other Israel Film Festival, but I hadn't been warned that it might end up rattling around in my head for days afterward. The whole notion of having a fundamental truth of one's life altered haunted me. I am still pondering the film week on, and I don't think this film will leave me for a long time.

The film plays Monday at the Marlene Meyerson JCC in Manhattan and Tuesday at the Alamo Draft Housein Brooklyn. For ticket and more information go here.
Posted by Steve Kopian at November 14, 2019