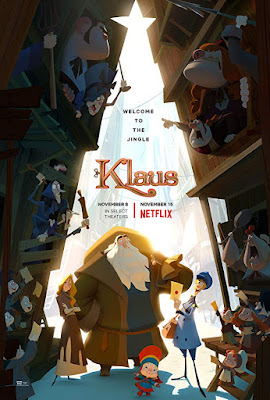 Sergio Pablos‘ KLAUS is a masterpiece. A heart warming holiday animated film that other than being about Santa Claus is ultimately not a holiday film at all but a wonderful exploration of how simple kindness and goodness can change the world. It is a vital message that we need in todays world where stupid rich people bully their way into controlling the world.

The film follows Jesper a cadet at the postal academy. His father is the big wig running the Postal Service and as such the family is rich and well off. Jesper wants to flunk out so he can live a life of ease. His father has other plans and sends him to a remote island as far north as you can go. He is to process 6000 letters in a year or else he’ll be cut off. Arriving there he find the whole place broken down and at war with itself. Things are so bad the school has been turned into a fish shop because the townsfolk won’t send their kids to school lest they meet people they don’t like. Forget the idea of sending letters. When a small boy loses a drawing he made, Jesper wants him to pay a postage fee to get it back…but things take a decidedly odd turn when the picture is seen by a woodsman named Klaus who wants to give the sad child a gift. This sets in motion the beginnings of Klaus’ new calling. 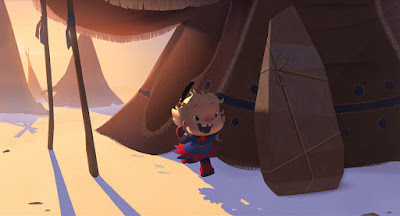 Warm witty and charming this is a big hug of a film. A glorious portrait of how one act of kindness, either intentional or unintentional can change everything. It is an old school tale told with modern smart ass characters (Norm MacDonald is very funny, as are most of the knowing one liners) but none of the modern knack of forcing schmaltz and goodness on the story. Everything that happened is genuinely earned, particularly Jesper‘s change from awful terrible self-centered twit to nice guy that everyone loves.

Beautifully hand animated,, this is a film where the art and animation bleeds love and caring off the screen. This isn’t the typical computer generated 3D characters that wander through most films today. Rather this is throw back to classic Disney and Fleischer and we are all the better for it. There is a warmth to everything that the hand crafting carried over from it’s creators that is normally lost when simply deduced to ones and zeros. Best of all there is a style that is all Klaus. We are no on Disney-land or Imagine or Blue Sky or even Ghibli. Because we haven’t really seen a feature that has this style before we can’t assume that we know what’s going to happen-it’s all new to us.

I have not been able to stop talking about Klaus since I saw it. From almost the first frame I was enthralled. I smiled my way through the film- pacing to get misty depending upon the sequence. This is a glorious film that everyone needs to see if only in that it will make us feel good and much less cynical.

Highly recommended- one of the best of 2019-lets hope this gets an Oscar nomination.

See it on Netflix 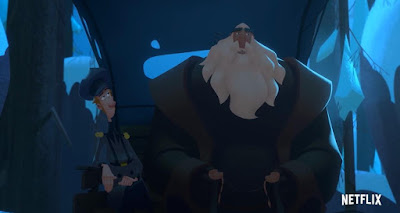