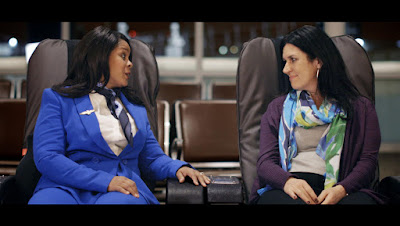 Cinematographer Troy Campione along with Jennifer Simon directs a script by his wife in the story of two women who meet in an airport by a row of massage chairs. An empty nester (writer Jill Campione) is harried and trying to make a flight when she is noticed by relaxing flight attendant (Debra Miller) who tells her to take a load off and relax a couple of minutes. As the massaging chairs work their magic the pair sort out growing older, being parents and life in general.

Small gem of a film is a real delight. While the film at first seems to be a a little too staged in the set up, the once the two women begin to talk any concerns about the start falls away and we have a marvelous little discussion by two world weary women who share some of their secrets of life. While the script most assuredly contains some nuggets of wisdom, it is the performances of the two leads that make this film work. They interplay between the women feels real and genuine with the result we fall into their conversation and by the end we are disappointed that the talk doesn't go on longer. The pairing of Campione and Miller is perfect and deserves a longer outing (perhaps in a feature?).

Helping a make this film shine is the excellent camera work by director Troy Campione. Normally it takes a great deal for me to pick up the work of a cinematographer but I’ve seen his work in several films and it is so good (in the right sort of way) that I've noticed his work.

Campione's and Simon's direction is nicely unobtrusive. More often than not when faced with a simple tale of two people simply talking often results in directors over compensating, but here the the pair stays focused on that matters, the women at the center. As a result we fall into the discussion and are not distracted by the airport around them.

As a said above this is a small gem. Definitely worth seeing as the film makes its way across the festival circuit.
Posted by Steve Kopian at November 29, 2019