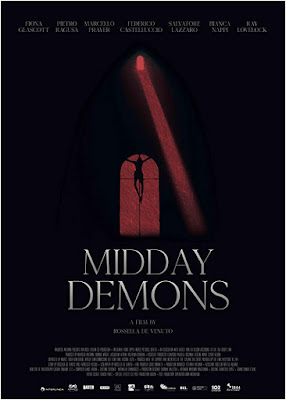 Couple goes to Italy to check on the family property which has been inherited by her husband. While there Megan begins to see presences and flashes of past events. As he tries to sort out what it all means she ends up going down a spiral into the dark past of her husband's family and its past.

Euro horror that echoes any number of classic and semi classic films from the 60's 70's and 80's that had a new family member discovering dark secrets MIDDAY DEMONS entertains. While most of the older films banked on darkness and shadow to set the mood MIDDAY DEMONS is largely sun drenched. All of the nightmares come in broad daylight (I'm not even sure there are any night scenes) which upsets our notion of what a horror film should be...can evil exist in the daylight in the movie world? Apparently it can.

Gorgeous to look at thanks to its Italian setting MIDDAY DEMONS looks like a million bucks. There is nothing inherently evil or troubling about most of the things we see but thanks to the choice of the right angle and the suggestions set up in the story there is a sense of darkness.

Say what you will, I liked MIDDAY DEMONS. While it does echo some similar films, there is more than enough differences to make this stand on its own. Best of all the plotting is such that I genuinely wanted to know what the hell was going on.