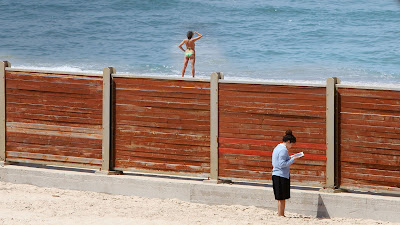 In Orthodox Jewish circles, the concept of “tzniut” — often translated as modesty — is a contentious one, as much about what may be shown as it is about what may be seen. This translates into the clothing that may be worn, the places to be avoided, and whether to use a filtered internet connection or any at all. As in many other cultures, the clothing is a defining characteristic, where holding onto it may symbolize greater devotion and avoiding can be interpreted as rebellion.

Writer-director-cinematographer-producer Karin Kainer, in her third documentary, turns her camera to a walled-off beach in Tel Aviv, Israel, where the days are men-only and women-only, and Orthodox women — the focus of Kosher Beach’s narrative — have the chance to unwind without concern of being seen by the men of their Chareidi community (referred to by many as ultra-Orthodox Jews). As one woman explains, the Torah teaches “and you shall greatly protect your souls,” which is taken to mean that exercise and recreation are important to living good, Jewish lives. I once heard a rabbi say that if “Kosher entertainment” were not arranged for Jewish communities, they might find other, less savory things to do with their time.

There are three cultural conflicts that infuse Kosher Beach with its story: between the women and their community, the women and their daughters, and the daughters and the Tel Aviv culture, a stand-in for a secular modernity in seeming conflict with a religiously Orthodox life. The lifeguards tend to be on the more Chiloni (secular) side of the Israeli-Jewish spectrum, but they get along well with the women of their beach, who bring them frozen grapes and watermelon, and who make Sundays a holy day for one of the lifeguards with their presence.

It’s a tough thing to exist in a world and to feel out of pace with it. The Chareidi man tends to dress in the same style as European Jews did over a century ago. Clothes, for some, can feel limiting, especially for women who face the expectation that they should cover themselves up so that the men of their community would not see them. A daughter of one beach-goer asks, why don’t they just look away?

Kainer’s documentary shows the beach with a tender eye, highlighting the relationships and moments of happiness that make this place where women have a place to swim and dance in their shvimkleid (modest bathing suits). One lifeguard remarks, “this is a sanctuary.” The camera turns a sympathetic eye to the teenage girls who come to the beach first in their tank tops and shorts, then slim and slimmer bikinis (One woman says, “She should be with non-religious…she’s naked!”). They’re among other women, other Orthodox Jews, trying to stay in the fold and also feel free, but they still face judgement. The adult women are faced with the danger of their beach being closed down — “Who will save our daughters?” one rabbi exhorts.

In Kosher Beach, there is no clear resolution to a problem that’s not really just about a beach and that’s not really just about being able to choose one’s own clothing. Terms like Chareidi and modern Orthodox and Chiloni tend to be limiting to those using them to classify others and to those being classified. They set boundaries of expectation that don’t necessarily allow for an irreligious man to put on a tallit and tefillin (religious articles) and pray or for a strict follower of Judaic law to be able to spend a day at the beach.

In the end, it’s not the teenagers who commit the greatest rebellion of the film, and it’s not the rabbis we see reciting Tehillim (Psalms) as a missile lands within a short distance of the shoreline and nobody is harmed. “On the one hand,” one girl expresses, “I want nothing to do with these annoying ultra-Orthodox. On the other hand, I do want to be…I don’t know what I want to be.” While the figures and characters may create restrictions and expectations for each other, Kainer gives them the room to explore the ambiguity of not always knowing what to want.
Posted by Steve Kopian at November 10, 2019