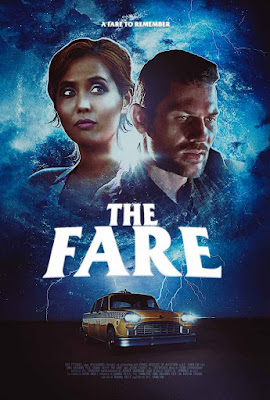 Cab driver stuck in the middle of nowhere picks up a passenger. As he drives her to town she suddenly disappears....and then things reset and it all happens again and again... As things play out over and over again he becomes more and more aware  of what is happening...

Forgive me for no saying more but to do so would reveal too much. Honestly I recommended this film to a couple of friends and had to tell them I'm recommending THE FARE to you for reasons which will become clear once you see it-however until you see it I can't tell you what they are. Trust me on this, the fun of the ride is waiting to see how it all plays out.

A good cast and good direction over come the limited budget and over use of computer generated images (don't go crazy its some shots of the cab  and nothing that implies anything else) to make this a compelling little time passer. While not destined to make top ten lists, it is something that you are likely to sit through more than once simply to find all of the clues that you realized were there all along, which is something you probably won't be able to say about most films on top ten lists.

The Fare will be available nationwide November 19th on Blu-ray and Digital HD, including iTunes, Amazon Instant Video, Google Play, Vudu and more from Epic Pictures.
Posted by Steve Kopian at November 18, 2019

Email ThisBlogThis!Share to TwitterShare to FacebookShare to Pinterest
Labels: fantasy