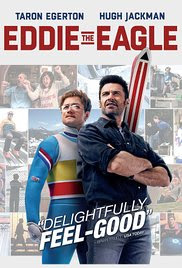 Highly fictionalized but incredibly uplifting recounting of the saga of Michael "The Eagle" Edwards aka Eddie who used a loophole in Olympic rules to get on to the British Olympic Team as a ski jumper.

As told here Eddie was a sickly kid who always wanted to be an Olympic athlete. Being a good skier he almost made the team but switched to ski jumping because there were no British ski jumpers. Trained by an almost great  Eddie makes it to the Olympics and into everyone's hearts.

Despite taking great liberties with the story (where do I begin?) the film turns the tale into a charming heart warming never say die tale. Bouyed by a great cast headed by Taron Egerton as Eddie and Hugh Jackman as Bronson Peary Eddie's (fictional) trainer. Hitting every note that you'd expect from a story like this EDDIE THE EAGLE is an absolute delight. Clearly it knows it's a smarmy movie and it revels in it keeping it all light and breezy.

I absolutely love the film. Who cares if only 5% of the film is fact it still is enjoyable all all get out. The most amazing thing about the film is that I have yet to meet anyone who has seen it who hasn't liked it. Everyone is completely amazed that it didn't have a long run in American theaters because it's just so much fun.