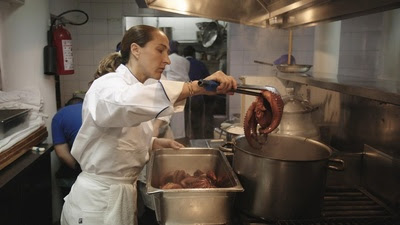 Portrait of two restaurants. one Mexico City and the other in San Francisco that build a community around them.

Odd documentary never really comes together. Focused on the people who work and dine at the restaurants and not the food the film is supposed to be about community. While it's clear that the two restaurants are similar to each other, the hook  of the San Francisco's sense of community being based on the the Mexico City one is not really made clear until the closing moments, with the result the film seems to be about two random restaurants with similar ideas.

To be honest I don't think the film works as a short. Ideally this should have been a feature where the director explores the connections more fully.  While never bad, I kind of didn't know why I was watching the film for most of it.

(Though I will happily see any longer version that comes along)
Posted by Steve Kopian at May 06, 2019