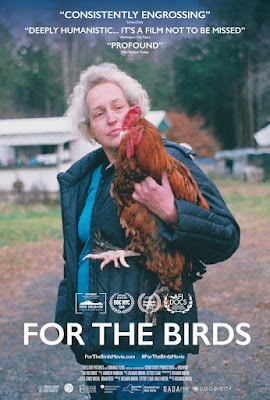 For the birds is the story of Kathy Murphy who over the years amassed a collection of over 200 birds (ducks, geese, turkeys,) much to the consternation of her family and neighbors. With the help of caring animal rescue people, friends and family we watch as she deals with her fowl addiction. We also watch the implosion of her marriage

While I like For The Birds, my reaction to the film was affected by the fact that I deal on a regular basis with a woman at my day job who is speaks in a similar fashion as Murphy and is just as lost in her own mania. No matter how serious a film is I am always looking to escape mentally to someplace else. For me watching the film was like being stuck on the phone with a certain woman for 90 minutes which made it hard for me to completely lose myself in the film.

My personal problems aside, For the Birds is a good film. A sympathetic portrait of a woman who is lost in her own mania the film makes us care for Murphy enough that we really want to see her get better. We also feel for her husband who is lost in his wife’s madness and really just wants a quiet night’s sleep. It’s heartbreaking and completely compelling. How compelling? While I was watching the screening link it my dad wandered by and saw part of it and just stood there watching for a good chunk of the film hypnotized by the film.

If you want an offbeat film that isn’t typically a Hollywood documentary give For the Birds a look either in theaters or VOD.
Posted by Steve Kopian at May 31, 2019