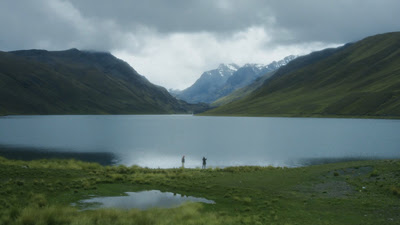 The film is nominally a look at Gustu in Bolivia. It is a nonprofit cooking school and fine dining destination that was going to only take in underprivileged people. It was set up by Claus Meyer whose restaurant Noma, had won the award for the best in the world four years running. Wanting to take the idea of a restaurant that served only food produced within the borders of the country in which it was located to another location he decided to open one on Bolivia. Meyer decided on Bolivia because of its rich agricultural bounty and because he thought the country could use a boost from gastronomic tourism. The film is supposed to be about how the restaurant and school are changing the society.

The reality it is a very unfocused film that just seemed all over the place. Beginning with a long sequence of a boat traveling through the night for some unknown purpose (it is revealed to be a crocodile hunt) the film then jumps to the restaurant, a look at Meyer‘s career, a discussion of Meyer by three local chefs and finally two of the restaurants chefs traveling the country collecting ingredients. And running through it all is an interview of Meyer by his young daughter.

Nothing connects up, Nothing is explained.

We never really know anything about the food scene in Bolivia either from a restaurant or the country in general. What foods do they have? What makes them special? We don’t know. What makes Gustu so special other than Meyer opened it? We don’t know. Who are the people who go there? Who are the people who work there? We really don’t know. I’ve seen dozens and dozens of similar films and within the first ten minutes I had answers to all those questions. After almost an hour I knew none of those things.

Most of what we got was long sequences of people wandering around looking for food, a long self-serving interview with Meyer and an endless obsession with listing the altitude of every location as if it means something. For a film nominally about a place we spend almost no time there. It’s so bad that all I can remember about the place is the front, which we see a couple of times, and the dining room which we see once. Any shots of the kitchen are simply a sea of people.

I kept waiting to know be told something wonderful, but there was nothing. So I left.

Maybe it came together in the last half hour or so, but somehow I don’t thinks so.
Posted by Steve Kopian at May 10, 2019