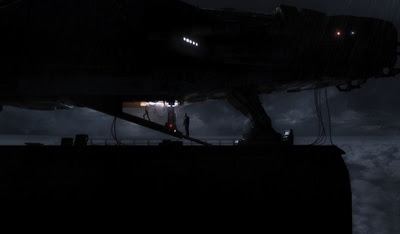 Bobby Bala’s The Shipment looks like a million dollars. It looks so good that it is probably the best looking film at this year’s Tribeca Film Festival. It is clear that all of the million plus dollar budget went into the visuals. Unfortunately they should have spent some of the money on a script.

The basic plot has a father and daughter who carry cargo through space having to decide what the next step is going to be when a delivery goes bust and they can’t pay for needed repairs.

Told in visually composed shots that high light the director’s background in animation and visual effects The Shipment suffers from a problem in pacing. While a film should have some establishing shots to set the mood and place, there is a point where the images have to give way to the story and characters. In the Shipment that never really happens and as a result the sequences run longer than they need to. Characters get lost in the scenery. We drift off and stop caring. Running only 27 minutes it feels several times that because we this is just pretty pictures.

To be honest I have a feeling there is a good short to be found inside The Shipment, if only someone less connected to visuals recut it.

A disappointment
Posted by Steve Kopian at May 08, 2019