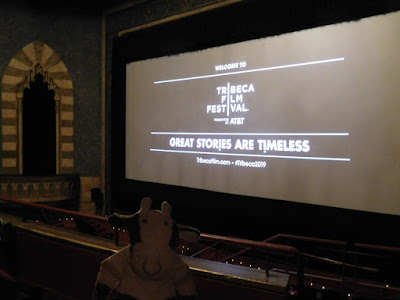 It has been over for two weeks but we have been so exhausted that we are only now getting our festival wrap up posted. For a festival that didn't go as any of the Unseen crew expected this is par for the course.

What follows is some questions, originally posed by Peter  that were answered by Nate and myself. While the entire crew was invited to participate several people declined simply because they wanted  to move on after five or six weeks in the Tribeca isolation tank (we started watching films in March)

1. What surprised you most about the festival this year? I’m thinking film-wise, but if you want to talk about Q&A’s, events, or snacks, please go ahead.

STEVE: It all seemed rather low key. I was at several of the big events and in a weird way outside of the premiere of YESTERDAY most of the events were not as crazy in years past. There was a muted quality to it. Even the press screenings were really quiet (except for the industry people getting yelled at for being on their phones or taking pictures of the screen).

The other thing was how the Scorsese/DeNiro talk really didn’t work. I’ve seen Scorsese hold court before but the paring of the two friends missed. They desperately needed a moderator to spur the conversation.

2. What films are you telling your non-film-crazed friends or family members about, as in telling them to keep an eye out for (or stay away from) certain releases?


STEVE: GAY CHORUS DEEP SOUTH. I was talking to everyone about that. I was also talking about MAIDEN, but then again I haven’t shut up about that since I saw it last fall.

NATE: This year the only films I’ve felt compared to recommend have been docs--I wasn’t very impressed with their narrative slate. But among the docs, THEY KNOW NOT WHAT THEY DO, AT THE HEART OF GOLD, and ALL I CAN SAY are the stand-outs I’ve been bugging my friends about for a of couple weeks.

STEVE: Yes the docs were pretty much all exceptional this year. The ones I ended up mixed on simply paled in comparison to some of the others

3- Were there any films that you may not be raving about but which you think need a push because with so many films you are afraid it is going to get lost?

STEVE: There are a couple. One of which is SEE YOU YESTERDAY which (which is now) on Netflix, but is a small gem of a science fictions film. The problem not so much that it doesn’t seem to be getting any push from Netflix, but more that it has a really serious edge to it. It starts off as a kind of feel good family film and then goes dark as the time travel becomes a race to save someone from dying...and then dealing with the repercussions. I think many people didn’t know what to make of the film and its serious side. I think some people wanted it to remain like GOONIES with time travel.

NATE: I’m gonna throw Takashi Doscher’s ONLY out there, if only for the imaginary version that exists in my head where all the thriller nonsense is cut out of the third act. Seriously, that imaginary movie is an all-timer. I’d also say Jeremy Gardner and Christian Stella’s SOMETHING ELSE. We could always use more off-kilter horror out there.

4. Did any of the themes/sections in the programming, either intentional or not, work really well—or not?

STEVE: The Midnight Section was rather dead. I think there was maybe one really good film in the bunch (I know most people were partial to SOMETHING ELSE though I liked COME TO DADDY). The rest seemed like they were thrown there just to fill the section. Frankly some of the films in other section, IN FABRIC, for example belonged there more than in other places The films just didn’t have the wonder of past years.

5. Is there a moment that stands out for you, that you’ll remember for quite a while?

STEVE: I loved meeting Tracy Edwards (the subject of MAIDEN), Guillermo Del Toro’s talk with Alec Baldwin was great. Actually all the special events I went to were cool. Running into my friend Sam and getting to talk to him for the better part of an hour with neither one of us  having to run off to a movie was pretty cool.

I loved the conversations that resulted about the films. I got into a heated discussion over, one of my favorite films A PLACE WITH NO WORDS, with a couple of people who truly hated it. I think they are wrong, but it was nice to have a give and take argument that was longer than a twitter tweet.

And of course there was the really heated discussion about Marion Stokes, the subject of RECORDER that literally happened on either side of me. When one critic said liked he film but that he found her difficult as a person and then was accused of being a misogynist. When that kind of didn’t work it escalated into a charge he was a racist...watching the faces of everyone sitting on the bench at Village East was priceless.

NATE: I’ll never forget opening night of Rob Epstein and Jeffrey Friedman’s LINDA RONSTADT: THE SOUND OF MY VOICE when the entire audience groaned when one of Linda’s old bandmates said that their monthly rent for a beachside cabin in late 60s Los Angeles was about $80.

STEVE: 80 bucks that they had to split among them because it was too much.

6 Since we all watched a great number of the films as screening links- how has the use of links changed how you cover festivals and a huge fest like Tribeca in particular?

STEVE: The links made it possible to see so many more films than I could have only via screenings. I’m not sure that’s a good thing since it was kind of overloaded. I really didn’t say no to anyone. I also realized the difference between seeing something on a laptop and the big screen when after seeing MAIDEN on my laptop in September, I got to see it on one of the fests biggest screens and was blown away all over again. Or maybe blown away differently.

NATE: More than any of the other years I’ve covered Tribeca, my schedule prevented me from attending many press or festival screenings. Online links allowed me to effectively double my review output.

7. We are all veterans of Tribeca so I have to ask, as the Festival slides towards it’s 20th anniversary how did it compare to other festivals?

STEVE: I think it’s much more low key. Less peaks and valleys in the films. It felt like a placeholder year. I think some of the other years were better. It certainly had less films I was passionate about as being great or awful. This year they were pretty much all okay. Which is fine.

8. Let me throw the hand grenade question- which ties into the last question- what does the festival do right, and what needs to be changed?

STEVE: I love that the festival showcases so many films. I love that when you go you are more likely seeing something no one else has.

Part of of my dislike of the fest is it is so scattered across the city that it is difficult to jump from event to event. More so because of the trouble with the L train (which was not Trbeca’s doing) so going from Village East to the Beacon for the DeNiro Scorsese talk took the better part of an hour. Getting to the HUB or BMCC or the Roxy where most interviews were done required a budgeting of a lot of travel time.

NATE: I really admire how the festival has carved out a space for great documentaries. Now they need to do the same thing for GOOD fiction films. Stop accepting whatever random student films you get from all over the world and actually CURATE your selection for crying out loud.

STEVE: The narratives go up and down. I will say that I do think the one thing they do consistently every year- at least in the last 8 is the shorts. The shorts almost always rock. There is a reason that several people I know pick and choose the features they see but make a concerted effort to see all the shorts.
Posted by Steve Kopian at May 19, 2019