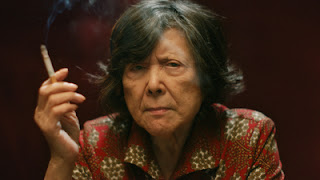 Told she is going to be lucky on a certain day Grandma heads to the casinos in Connecticut and wins a fortune, until she loses it. Slinking home on the bus the guy sitting next to her drops dead. Discovering that he has an even bigger fortune in his bag, and knowing he won't need it, she takes it and heads off...only to find that one of the gangs in Chinatown wants their money back.

Imagine an off kilter comedy from Hong Kong or Taiwan made and set in New York City and you'll have some idea of what's in store. A potent mix of comedy, drama and social commentary, LUCKY GRANDMA keeps us chuckling as we sit on the edge of our seats waiting to see how it all plays out. Where it goes and how it goes is often unexpected since things take a dark turn and even the "happy" outcome reveals an unhappy truth about how children see their older parents.

That the film works as well as it does is due entirely to Tsai Chin as Grandma. A seemingly tough as nails cookie who always has a cigarette dangling from her mouth, she is no one you really want to come up against. Chin also manages to break our hearts when the stern mask drops and you realized that inside she isn't as tough as she seems. Chin's ability to balance both sides should win her enough acclaim that she can get the leads deserving of an actress who has been working steadily for six decades.

One of the unexpected joys of Tribeca, the film is highly recommended.
Posted by Steve Kopian at May 10, 2019