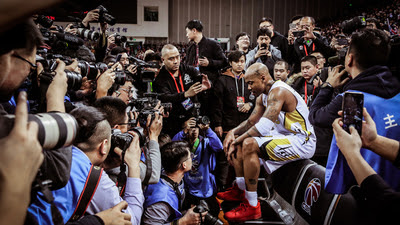 Portrait of basketball star Stephon Marbury who went from the best high school played in the country to troubled NBA player to a god like figure in China.

Good portrait of the ups and downs and ups of a great basketball player. Largely told by the people who know the man and via video tapes going back to the very start. Its a pretty much a by the numbers sports tale that kicks it up a notch once in the final twenty minutes or so Marbury goes to China which results in changes that take the film out of being run of the mill. Part of the reason it works as well as it does is the China story is just so damn interesting, the other reason it works is that Marbury finally arrives to help tell his on story and it's wonderful. Honestly the film should have given at least half of its run time to what happened in China and the changes it made.

The second part of the film also Marbury back in Coney Island and it has one of the most emotional moments I've had at the movies when Marbury tells a little kid he could be President and the little kid stares at him in disbelief because no one had ever told him it was possible. Its a moment that moves Marbury and the audience.

A solid sports bio A KID FROM CONEY ISLAND is recommended.
Posted by Steve Kopian at May 02, 2019