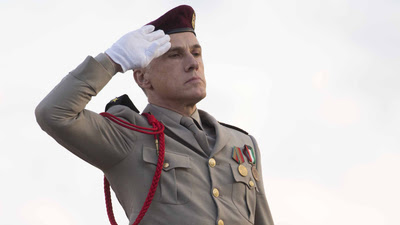 Georgetown is a strange film about a con artist, directed by Christopher Waltz, and based on a true story. Ulrich Mott(played by Waltz), is a German, who gets fired from his internship as a tour guide, then steals his ex-boss' ID to get into a dinner at the White House, where he then charms his way into the life of a famous journalist, Elsa Brecht. She is 90 years old, and he's about 30 years younger than her. They soon get married. Elsa's daughter, Amanda(played by Annette Benning), is suspicious of him from day one.

The film starts off with the end of a dinner party, Ulrich goes for a walk, and the next day, Elsa Brecht has died. Amanda believes that Ulrich murdered her. What follows is the police investigation, which mostly consists of flashbacks using chronological order of their marriage, and life, leading up to her death.

The film feels a bit outrageous and silly at times, but I found it entertaining, and was left wondering what would happen next.