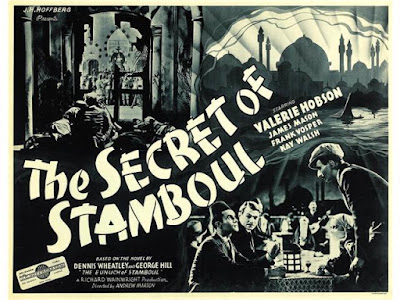 The Secret of Stamboul is a solid, if unremarkable, espionage film set in Turkey where an Englishman gets involved with trying to stop a coup.

The script is the weakest thing in this film which chugs along at a good clip hitting a lot of the typical spy/political thriller tropes that the English had honed to perfection in the 1930’s. As much as I like American spy films there is a nice uncomfortable edge to the British thrillers Hollywood rarely managed to achieve. While the plot chugs along at a good clip it doesn’t hit a lot of unexpected notes. Mostly it goes along just as we know it should. That’s not a bad thing but when you have interesting direction and great performances it kind of disappoints.

Despite the run of the mill script the film scores in two important places. First the film has a great cast. Everyone from top to bottom is first rate- including a very young James Mason in one of his first roles. Mason plays the hero and seeing him leap about and spring into action is a revelation. He is not the staid middle aged gentleman he would become. The closest thing I can think of him as is Captain Nemo who lead the attack against the Squid in 20,000 Leagues Under the Sea. Seeing him in action you can understand why he became a big star.

The other place the film scores is in the direction and editing Andrew Marton'schoice of shots and combination of them with in a sequence are amazing. Watching the film there was times I was amazed at how the cast was moved in and out of the frame. At other times I was thrilled at the shot choices which lifted the film up from run of the mill and made it much more special. The images moved the film along.

While not the greatest thing to come down the pike it is entertaining and worth a look if you run across it.
Posted by Steve Kopian at May 24, 2019