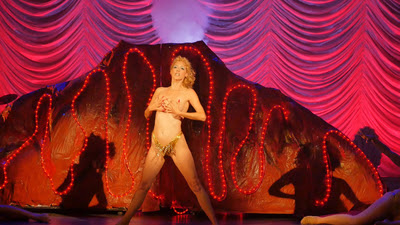 The first thing you need to know about You Don’t Nomi is that is you don’t love Showgirls on some level, and if you don’t have a working knowledge of it skip it. The film assumes you know the film well enough to know what is talking about from frame one. The other thing it assumes is you actually think the film is a film worthy of reconsidering. If you are not already on board with its lost classic status either as a masterpiece or MST3K material then this film is going to be a long haul.

I’ve never cared for Showgirls. I saw it when it came out and thought it was a technically well-made comedy/satire that was unfunny and just bad. Having retried it several times since then I give up ten minutes in and walk off. I was curious if this doc would change my mind.

The first thing that struck me about the film was that it assumed I had a working knowledge of the film. References are thrown around freely and I struggled to keep up. There is no effort really to explain the film, yes we kind of sort of get the story of its creation but nothing about what the film is.

This ties into the films second flaw which is the film really isn’t well organized. The film simply jumps from point to point without building anything. This might not seem so glaring if you know the film, but without it seems like you are getting pelted by delicacies in a bake shop- here’s a cookie! Now a Cup cake-a tart- cheesecake-crumpets…. Or in this case Elizabeth Berkley’s performance being the result of Verhoven’s direction, nails and chips, the sex, the falling out of the creators…. The film is all over the place.

What You Don’t Nomi feels like is one of those You Tube videos where a super fan of some maligned film explains in 15 minutes why their film is the greatest thing since cinema was invented and here are all the things you missed, except it runs 85 minutes. Or perhaps it’s a third commentary track on a DVD special edition where some super fan drones on endlessly about all the things we missed and which only would matter if we loved the film as much as he does.

And I think that’s where I’ll leave this-You Don’t Nomi is a lower level DVD extra only for fans who think like the filmmakers. All others stay away.
Posted by Steve Kopian at May 02, 2019