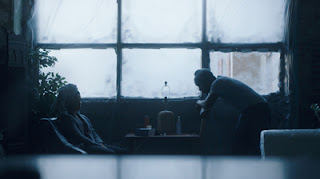 Post apocalyptic tale concerns a disease which wipes out almost all the women in the world. Ava manages to keep free of the disease thanks to her boyfriend, Will, who keeps her quarantined. However she is beginning to go stir crazy and the authorities are rounding up all the surviving women so they can use them to try and stop the approaching end of mankind.

Beautifully made and exquisitely acted film misses being the truly great one it should be thanks to a frequent sense that we've been here before. Blame writer director Takashi Doscher who insisted on adding a thriller element to to proceeding instead of just focusing on Will and Ava. If he had just focused on them and cut out most of the other stuff, and especially the father and son, this would have been a soul crushing masterpiece  instead of just okay.
Posted by Steve Kopian at May 05, 2019