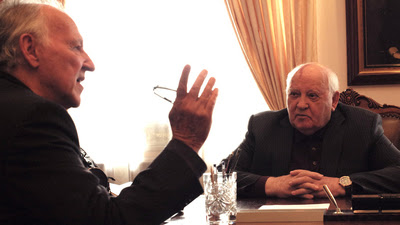 One of two Werner Herzog films playing at Tribeca is being billed as Herzog's interviews with Mikhail Gorbachev, i n reality it's more Herzog's biography of Gorbachev with portions of the interview.

Very Herzogian look at life and history will be eye opening to anyone who really hasn't known a great deal of Gorbachev's story. I didn't know all the things that happened in his early years and as a result I came to better understand why things changed as they did once he took power.

As good as the film is at explaining the arc of the great man's life, the film kind of disappoints because we don't get enough of the talk between filmmaker and subject. Its clear from what we see that Gorbachev is a charmer and it's kind of sad that we get so little of the meeting between the filmmaker and the subject.

Regardless, the film is fascinating and a must for anyone who wants to understand how we got to here. And why Russia is as messed up as it seems to be.
Posted by Steve Kopian at May 05, 2019