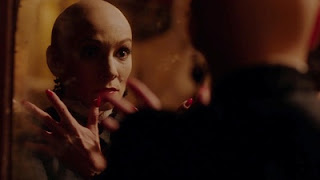 Peter Strickland's bat shit crazy tale of an evil dress, the people who made it and the people who are destroyed by it is one you will either love or hate. Maybe at the same time.

The film is almost two parts. The sequences telling the stories of the bank clerk who buys the dress to wear on a date and the washing machine repair man who inherits the dress after a bachelor party are pretty much straight forward horror tales. The dress haunts them in sequences that are both funny and scary.

At the same time the film presents us the world both of the businesses the characters work at and the clothing store that sells haunted clothing. The places of employment are bizarre big brother like establishments which hint a world similar to George Orwell's dystopia as viewed by Franz Kafka. The clothing store is a giallo nightmare crossed with the strangest 1970's Euro-horror and a dash of off kilter comedy. Weird doesn't begin to describe it.

Worth a look for the adventurous and lovers of the strange. All others stay away.
Posted by Steve Kopian at May 04, 2019