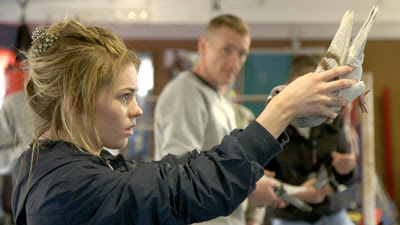 Scheme Birds refers to the residents of the not fancy homes in a small town in Scotland. The town was once a steel producing mecca but Thatcher killed the industry in the 80’s by moving the industry to England thus wiping out towns and villages in other parts of the UK. It is a place of great poverty where people either get “locked up or knocked up” if they don’t escape. Teenage Gemma lives there with her grandfather, who runs a boxing gym and raises pigeons. We follow Gemma over several years as she dwells in the stagnation, drinking smoking and taking drugs, as well as falling for a guy with few prospects. Ending up pregnant herself she is forced to grow up very fast, especially when a close friend is nearly beaten to death.

How you react to Scheme Birds will depend upon how you react to the first two thirds of the film. Most of the first hour is aimless wandering. We watch as Gemma and her friends curse, fight, drink, get pregnant and fight some more. Days blur. This is how life seems to go the town. On screen time is simply marked by an odd comment, or how big Gemma’s son gets or when someone goes in or out of the hospital. It is random moments in time with no point. It is only when things start to slide around Gemma that the film gains a direction and that it becomes compelling. As her boyfriend slips back into old habits, she begins to realize that in order to keep her son she has to go that the film gains traction. It’s great stuff but it is kind of too little too late.

The problem with the first hour is its random nature. Little happens other than people hanging out. While I completely understand this is their life, I would have loved to see more of their lives. Where do they get money? How do they go through a day beyond drinking? We have no idea. Gemma’s grandfather drops out of the film at a certain point and we know why but on the other hand it’s left hanging, as is the fact that she is cut off from her family. Later as she heads to England there is a reference of a reconciliation with her grandfather but there are no details.

Another problem with the film is so much of the film takes place off screen. Things happen and we are only clued in when we drop in weeks or months after the fact and we hear a passing reference to something. There are weird jumps in time as months pass randomly. This feels like the filmmakers filmed Gemma here and there and whenever they could pop in hoping for something to happen. It seems as though it wasn’t until tragedy and heartbreak happened that they had enough to stitch together. Even then huge periods of time are missing. It might have worked if there had been more of an attempt at context, but there isn’t so everything is left hanging and we never know why or how. (Why England?)

I would love to know how much footage was shot and how the choices were made to structure the film, because while I’m sure it makes sense to the directors or those close to the production, but for the rest of us it’s empty.
Posted by Steve Kopian at May 02, 2019