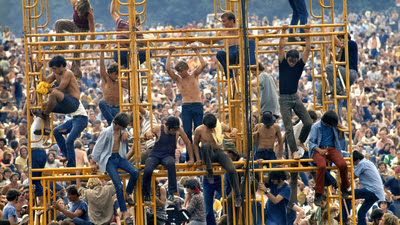 Do  not go into WOODSTOCK: THREE DAYS THAT DEFINED A GENERATION expecting a film about the music. There is some. Mostly this is the story of those that put the shows on and the people who attended with archival footage of the festival. Do not go into the film expecting a lot of new material, there isn't much. Mostly this is just a grand explosion of nostalgia.

I liked this film but I didn't love it. Growing up with with older friends who went to the festival I have spent the last 50 years awash in tales of what happened and what it was like. For me I've heard many of the stories or similar stories so there wasn't much new story wise.... on the other other hand all of the footage of the crowds, the hog farm and such was enlightening. Yes I've seen other docs, but since they tended to take a broader view of things I don't remember ever getting such a sense  of place and time as I did with this film. Yes, you've seen much of the footage but connected up to new footage and given a new context the film shines a light into what it was really like being there.

Worth a look for anyone who was there or wants to know what it was like to be there.

WOODSTOCK's festival run is don. It will open in theaters May 24th
Posted by Steve Kopian at May 07, 2019