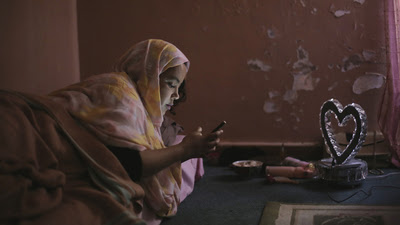 With the announcement of Verida’s arranged she begins the process gavage, a ritual over eating to put on the weight that Mauritanian men seem to like. As she is force to eat more and more Verida's life goes more out of control as she is forced to deal with a suitor from outside the family, friends who don't understand and societies conflicting thoughts about what is beautiful (she is forced to eat to gain weight while confronted by ads for weight loss)

Beautifully shot film (that final image is truly gorgeous) will not be for all audiences.Some people will not be able to tolerate either the slow pace the endless forced eating sequences or both. For those that can endure the film they will find it's mediation on notions of beauty and a woman's right to be herself, amongst other things, rewarding as the ideas play in their head.

Personally this is a film I admire more than I like. The gavage scenes made me ill after a while. While I know that is the point it made sitting through the film difficult. On the other hand the performances are first rate and the film is visually stunning.

Worth a look if the subject interests you.
Posted by Steve Kopian at May 02, 2019