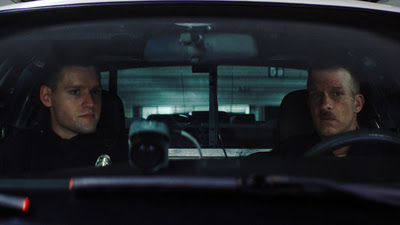 On the evening after two well armed bank robbers kill and injure several cops only to get away, two cops, one nearing retirement, and the other making his first patrol go out on patrol and things happen.

Forget the real world and CROWN VIC will entertain. Covering one tour between new partners, the film has more happen in one shift than most cops experience in a life time, and do more things than is possible to do in one 8 or 12 hour shift. Never mind they never have to fill out reports, there simply is too much going on here.

If you can put all impossibilities aside CROWN VIC will entertain. a killer thriller with some fantastic sequences, numerous funny lines and a great deal of suspense the film is one of the great surprises of the festival. Why no one is talking about it is beyond me because the film is a great little thriller on it's own terms. It does everything a movie should do.

For anyone willing to take the film at face value it is highly recommended.
Posted by Steve Kopian at May 05, 2019