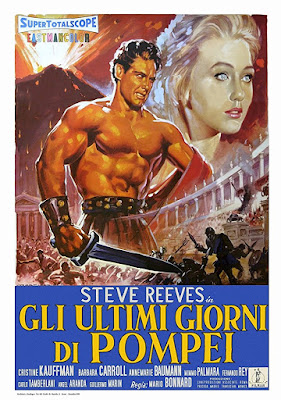 Despite being listed as being directed by Mario Bonnard the real director was Sergio Leone  who took over when Bonnard fell ill. The film is also notable for being the film that introduced Leone and assistant director Sergio Corbucci to the plains of Spain.

Epic retelling of Edward Bulwer-Lyton's novel of the fateful final days of the doomed city is full of delights for the eye. Beautifully shot in eye popping color the tale of love, murder and treachery in 79AD is just great fun to watch.  Soapy interactions are interspersed with the occasional action sequence thus keeping us entertained until the volcano erupts and everyone is sent fleeing.

The final 20 minutes or so is the eruption and it's handled pretty well. Lots of falling ash,and collapsing buildings keep the fleeing masses on their toes. While not as spectacular as some other cinematic versions of the eruption the mayhem is more than adequate with the ground opening up and a bit of lava.

Entertaining on pretty much every level this isn't high art but it is great fun. It is also an intriguing first look at Sergio Leone before he would go on to make is legendary westerns.
Posted by Steve Kopian at May 16, 2019