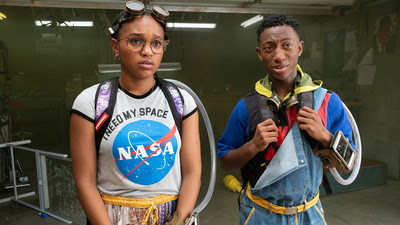 SEE YOU YESTERDAY is probably the biggest surprise at Tribeca. An unexpected winner, I am kind of stunned that the film was unceremoniously dropped into the press screenings late in the fest. This is the sort of genre changing film that really could have and should have been screened early and often in the festival since word really needs to be spread about this gem of a film.

CJ and her friend Sebastian have managed to make back pack time machines that can go back one day for ten minutes. They hope to use their inventions to win scholarships and eventually high paying jobs. Things begin to unravel when CJ's brother is shot and killed mistakenly by the police and the pair modify their machines to go back in time in order to try and save him... but things don't go as planned....

What I thought was going to be a typical family film quickly morphed into a stand out science fiction film mixed with a heart wrenching social commentary. While science fiction has always been used to make a commentary on social ills, more often than not you can feel the preaching. Here that isn't the case and the commentary blends perfectly so that there is an immediacy that is often lacking in other films. Director Stefon Bristol walks the fine line perfectly and manages to construct a story that brings home exactly how devastating gun violence is to those left behind, and he does so in such away that anyone seeing the film will understand better than probably any non-fiction film could. I say this because there were several films also playing at Tribeca that also explored the aftermath of gun violence but none had the same emotional impact as this small gem of a film.

As a drama SEE YOU YESTERDAY is excellent. It's a seemingly simple story that reveals itself to be wonderfully complex. Yes, on some level this plays like a family film, but where it goes and how it goes reveals it to be something way more. This isn't a feel good and they lived happily ever after film but an exploration of pain and grief. I know the ending left some people in the Tribeca press audience surprised in a good way since it doesn't take the easy way out (which the critics should have seen by the earlier twists.)

Let go of you're preconceived notions and SEE YOU YESTERDAY will reveal itself to be a stunner of the highest order.

Highly recommended when it hits Netflix on the 17th
Posted by Steve Kopian at May 11, 2019