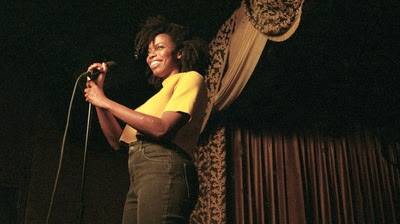 The Weekend starts off with a stand up comedian, Zadie,on stage talking about how she hasn’t gotten over her ex boyfriend and it’s been 3 years. The next scene she’s in a car with a guy and gives him a gift. I was confused. We soon find out this is her ex boyfriend, and she, and his current girlfriend(who was very unlikeable) are spending the weekend at her moms bed and breakfast. Very strange. The ex and new gf sit up front in the car, and are kissy and flirty, while Zadie is in the back wincing. How could they not think this whole situation is uncomfortable for her?

They get to the bed and breakfast, where we meet her mom who just wants her daughter to get married so she can stop worrying about her. Well well.. in comes another guest, Aubrey, who is there by himself. Everyone wants them to be set up, except her ex who almost immediately gets jealous.

This film becomes a love triangle of sorts, and new guy Aubrey doesn’t know what he walked into.

I enjoyed this film. I wouldn’t say it’s the best film ever, or to run to see it, but I do recommend checking it out. Sasheer Zamata plays Zadie, I wasn’t familiar with her, as I don’t watch SNL and that’s what she’s known for, but I liked her a lot! The Weekend is a fun and light hearted movie.