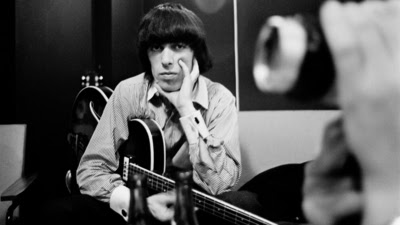 There are only a handful of bands that ever got big enough for their members to be known on a first name basis. One of the very first was British rock band The Rolling Stones, that notorious gang of Londoners who conquered the world in the 60s with their distinctive blend of electric blues and R&B. Many members became mononymous icons: Brian, Jagger, Keith. But one of them who never broke through into that limelight was their bass player Bill Wyman.

Described by friends and acquaintances as “Stone-face,” the moody, introspective bassist gained his own brand of fame exactly for not being famous, largely shirking his band-mates’ hard-partying lifestyle. While they spent much of the 60s and 70s self-destructing from drugs and alcohol, he largely kept to himself, spending his spare time with amateur photography and memorabilia collecting. “I suppose if you looked at my bookshelf you’d understand me better,” Wyman chuckles in Oliver Murray’s new documentary The Quiet One, a film featuring his sprawling personal archive of previously unseen photos and film footage of the Stones from their rise as a London pub band to their legendary Steel Wheels/Urban Jungle reunion tour (1989-1990).

But therein lies the film’s greatest problem: while pretending to be a documentary about Wyman, for the majority of its runtime it’s actually a Rolling Stones documentary in disguise, caring only about him to the extent that he was involved with the band. And even then, it’s an embarrassingly truncated history that sidesteps their more embarrassing moments like their ill-advised forays into psychedelic rock and disco.

There are glimmers of an actual documentary about Wyman buried within: an impassioned lecture about how “proper” bass playing follows the drum instead of mimicking the lead guitar; the story of how he “invented” the fretless bass by custom refitting a crappy bass he got on the cheap; the tear-jerking reminiscence of meeting his musical idol Ray Charles backstage after a show. But all too often Murray shoves Wyman to the side for more insights on the Stones (which might not be so intolerable if the audio wasn’t mixed so poorly that many of the interviews are inaudible under the deafening roar of concert footage).

A proper film about Wyman shouldn’t leave audiences ignorant of his amateur archeology exploits, including the discovery of ancient Roman artifacts. But alas, here we are.