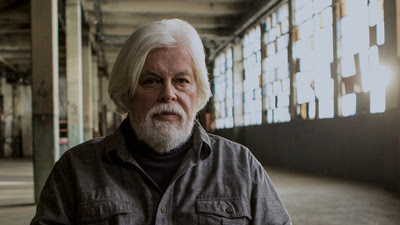 Portrait of Paul Watson founder of Greenpeace and Sea Shepherd. We here stories of some his adventures, watch some stunning footage of whales in the distant ocean and are lectured about why conservation matters.

Great looking film  about a man and his glorious calling is considerably less than it's parts. Yes we learn about why the seas and the creatures that live there are important as well as something about the man, but the film is so poorly put together it has none of the effect that it should.

How bad is the editing? We're probably a third of the way into the film before we get any sort of information on him growing up. Worse we never get any sense of any of the people around Watson on any level so they are just names with no weight. Not helping any of this is the fact that film jumps from thing to thing in time and space randomly. How bad is it? Watson get three or four sentences about how the destruction of the the micro organisms disappearing endangers the planet when suddenly the film is talking about how the Interpol red flags were great because it allowed for him to meet his wife and father a son. I thought finally the film as going to pull it all together but instead it veers left and crashes through a wall and into the parking lot.

On the plus side, and the reason to see the film is the stunning photograph which fills the film. I've never seen whales like this and it's a kick in the ass.The images will do more than the rest of the film ever will.
Posted by Steve Kopian at May 03, 2019