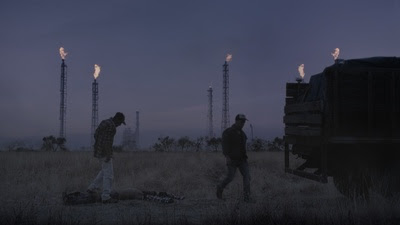 The Gasoline Thieves is roughly one third a kick ass crime thriller and two thirds a dull unbelievable melodrama. It is a film that had it followed the bloody trail of the criminals to the end would have been one of the most intense thrillers of the year. However it follows the life of a nebbishy kid who is much too naive to believe.

The film follows Lalo, a sweet teenager who runs errands and works to help his mom with on odd job delivering gas to one of the local landowners. He also has an interest in a young girl at school who tells him that the way t her heart is an i-phone. This sets him on the road to ruin working with gas thieves as he tries to get the small fortune for the phone.

A great looking film with a fantastic sense of place, the film is hobbled dramatically with a central character is as dull as dirt and is compelling in watching a car speed toward certain doom when all the driver had to do was simply put on the break. All Lalo had to do was simply make a choice that wasn’t obvious a bad one. Then again this is a character who is more a cypher than anything. He says little, he has no interaction with anyone other than a few people. He operates with a level of naiveté that is so extreme that he apparently doesn’t know what a cellphone is. How could he be going to school and running around and be that completely clueless? Apparently he can and given the chance to do the right thing or the wrong, he will choose the wrong simply because it will keep the plot going. (I kept having the line from an old Woody Woodpecker cartoon running though my head “If Woody had gone to the police..”

Honestly we don’t need Lalo, all we need is the cop and the bad guys. Their sections of the film are killer and are much more gripping than anything that happens in the rest of the film. How good is it? The film opens with a theft and killing that so visceral that I was certain it the rest of the film would be an unbearable bloodbath. It was unbearable, but because it was tedious and not well thought out.

This is a misfire…

…on the other hand I want to see what director Edward Nito does next especially if it is the sort of crime film this film should have been.
Posted by Steve Kopian at May 07, 2019