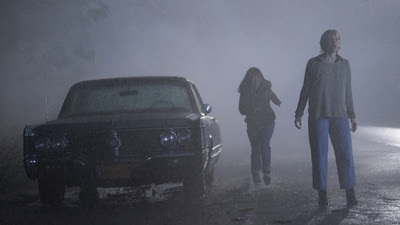 Jenny, a young woman in prison is visited by a police officer to talk about the events that brought her to prison. The film then flashes back to tell the story of how she was recruited by a college professor to babysit  a trio of terrorists in a home in Upstate New York until it was safe for them to move on. One of the women is the daughter of a rich and powerful family who changed sides after being kidnapped.

Based on a novel based on the Patty Hearst kidnapping, it explores the relationship between terrorists groups and ponders hat may have been going on in the head of Hearst during her kidnapping. How accurate it is to what may or may not have happened really isn't the point, rather it its merely a starting place to explore the lives of people struggling to change the status quo and other changing merely to survive.

I really liked the film. It took me a while to warm to the film since many of the characters seem like ciphers or one note for the early going. Who are the people around Jenny, it's not really clear at the start. We are in the same boat as Jenny in that we have to navigate through our time with them to discover who they are and what they ultimately want from her. What makes AMERICAN WOMAN such a strong film is that even as the film is ending our opinion of who the characters really are is still changing. It shifts around s much that I spent much of the day after seeing the film pondering who the characters really were. This despite seeing several other films after it.

For me the film is an unexpected joy. I went into it simply to fill a film festival slot, and walked out with a film I can't shake. While not a big and loud stunner, it is something better, a small scale gem that gets under yous skin and haunts you.